The History of Angkor Thom
Angkor Thom was established as the capital of Jayavarman VII's empire, and was the centre of his massive building programme. One inscription found in the city refers to Jayavarman as the groom and the city as his bride.

Angkor Thom seems not to be the first Khmer capital on the site, however. Yasodharapura, dating from three centuries earlier, was centred slightly further northwest, and Angkor Thom overlapped parts of it. The most notable earlier temples within the city are the former state temple of Baphuon, and Phimeanakas, which was incorporated into the Royal Palace. The Khmers did not draw any clear distinctions between Angkor Thom and Yashodharapura: even in the fourteenth century an inscription used the earlier name.The name of Angkor Thom—great city—was in use from the 16th century.

The last temple known to have been constructed in Angkor Thom was Mangalartha, which was dedicated in 1295. Thereafter the existing structures continued to be modified from time to time, but any new creations were in perishable materials and have not survived.

Angkor Thom was abandoned some time prior to 1609, when an early western visitor wrote of an uninhabited city, "as fantastic as the Atlantis of Plato".It is believed to have sustained a population of 80,000–150,000 people.

Angkor Thom, the last capital of the Khmer Empire, was a fortified cit enclosing residences of priest, officials of the palace and military, as well as buildings for administering the kingdom.

Background of Angkor Thom
These structures were built of wood and have perished but the remaining stone monuments testify that Angkor Thom was indeed a "Great City" as its name implies. Temples inside the walls of the city described in this article are Bayon, Phimeanakas, Baphuon, Terrace of the Elephants, Terrace of the Leper King, Prah Palilay, Tep Pranam and Prasat Suor Prat.

The French ascertained a general plan of the Royal Palace (see map opposite). It included the temple-mountain of Phimeanakas and surrounding pools together with residences and buildings for administering the capital, which were probably at the back of the enclosure. Jayavarman VII reconstructed the original site of the Royal Palace Palace to erect the city of Angkor Thom, which was centered on the temple of Bayon and surrounded by a wall.

Zhou Daguan the Chinese emissary, who provided the only first-hand account o f the Khmer, described the splendor of Angkor Thom.

At the center of the Kingdom rises a Golden tower Bayon flanked by more than twenty lesser towers and several hundred stone chambers. On the eastern side is a golden bridge guarded by two lions of gold, one on each side, with eight golden Buddhas spaced along the stone chambers. North of the Golden Tower of Bronze [Baphuon], higher even than the Golden tower. a truly astonishing spectacle. With more than ten chambers at its base. A quarter of a mile further north is the residence of the King rising above his private apartments is another tower of gold, These are the monuments which have caused merchants from overseas to speak so often of "Cambodia the rich and noble "

Symbolically, Angkor Thom is a microcosm of the universe, divided into four parts by the main axes. The temple of the Bayon is situated at the exact center of the axes and stands as the symbolical link between heaven and earth. The wall enclosing the city of Angkor Thom represents the stonewall around the universe and the mountain ranges around Meru. The surrounding moat (now dry) symbolizes the cosmic ocean.

Layout of Angkor Thom
The city of Angkor Thom consists of a square, each side of which is about three kilometers (1.9 miles) long a laterite wall 8 meters (26 feet) in height around the city encloses an are of 145.8 hectares (360 acres). A moat with a width of 100meters (328 feet) surrounds the outer wall. An entry tower and along causeway bisect each side of the wall except on the east where are two entrances. The additional one, called the "Gate of Victory "is aligned with the causeway leading to the Terraces of the Elephants and the Leper King. A small temple known as "Prasat Chrung' stands at each corner of the wall around the city of Angkor Thom.

An earth embankment 25 meters (82 feet) wide supports the inner side of the wall and serves as a road around the city.

CAUSEWAY WITH STONE FIGURES
A long causeway leading to each entry tower is flanked by a row of 54 stone figures on each side – demons on the right and gods on the left-to make a total of 108 mythical beings guarding the city of Angkor Thom. The demons have a grimacing ex 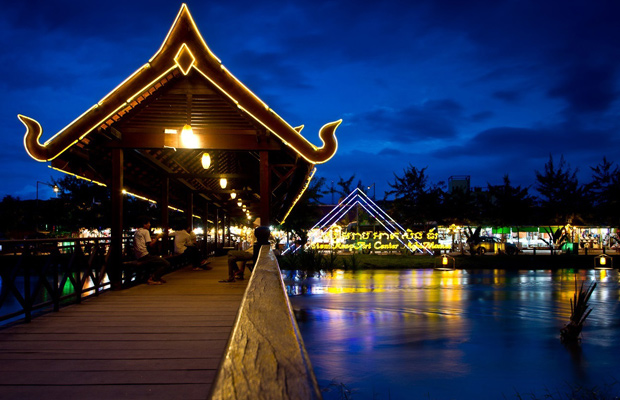 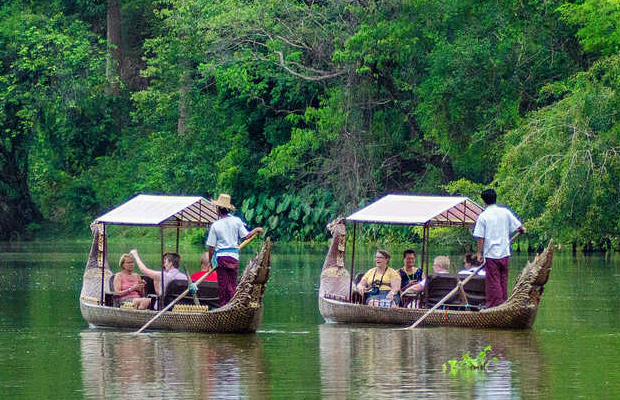 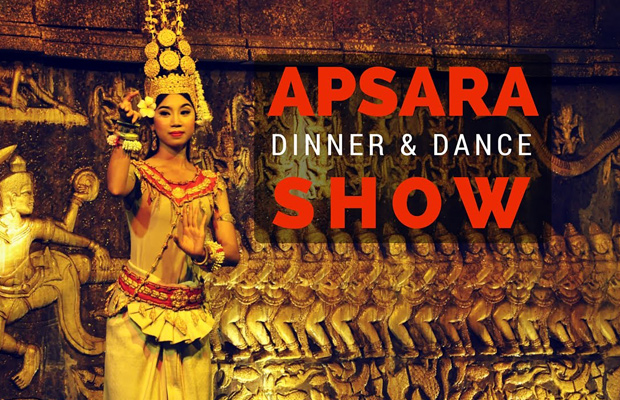 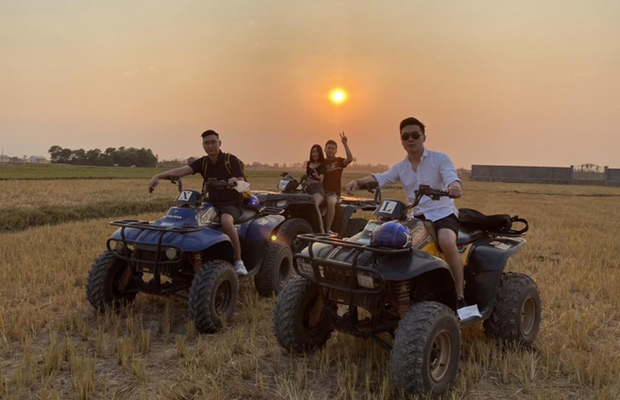 Siem Reap Quad Bike Adventure brings you to the authentic and unique beaauty of Cambodia which is hidden and unexposed to the world. ... read more 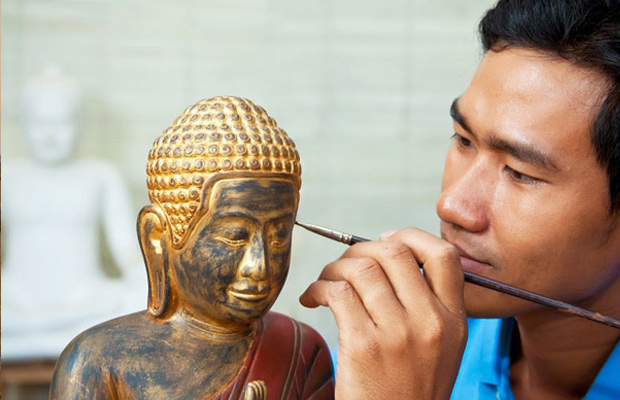 Visit the Angkor Silk Farm and take their free tour to see just how all those silk scarves come to be. Then head to the Artisans d’Angkor ... read more

Ta Prohm's state of ruin is a state of beauty, which is investigated with delight and left with regret. Ta Prohm is locating southwest of ... read more